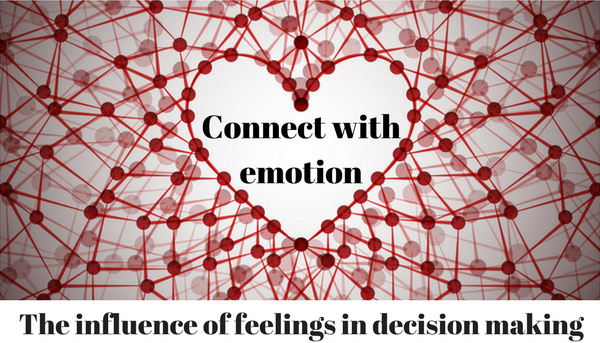 If our message going to be heard, understood and actioned, we have to make sure that it speaks to the part of our audience’s brain that makes decisions. To do that, we need to understand how our potential clients make buying decisions. Do they consider the factual elements about a product or service, or are they predominantly influenced by feelings?  The answer is actually that they do both, but at different stages in the process. Decisions are based on emotion and then, once made, are rationalised based on fact.  Understanding this has very interesting implications for effective communication.

A tale of two chickens

This dual approach was discovered in 2010 by researchers at the McCombs School of Business at the University of Texas, using, of all things, pictures of chickens. Their study showed that factual information, such as comparative features is important, but is used as a justification after the decision. The decision is actually made on an emotional response.

The researchers showed participants two photos of chickens – one was plump, white, covered in feathers and looked like a chicken out of a children’s picture story. The other was bald, skinny, pink and highly unattractive.  The participants were divided into two groups and all told that that the plump chicken was natural and the skinny chicken was genetically engineered.

Two versions of the ‘truth’

However, they were given additional information that varied between the groups.

Group A was told that natural chickens are healthy but less tasty and genetically engineered chickens were tasty but less healthy. Group B was told the opposite.

All participants were asked to select their preferred chicken.

Almost all the participants selected the plump chicken. Not too much of a surprise. But where this experiment gets really interesting is when the groups were asked for the justification for their choice. Those in Group A said it was because they felt that health was the most important factor; Group B said they valued taste above all.

No-one openly justified their choice based on how they felt about the chicken’s looks. Rather, they rationalised their emotional choices with non-emotional reasons, to the point that the two groups found completely opposite ways to justify the same decision.

The research team at McCombs call this “post-hoc rationalisation” – the fact that we make decisions based on emotions, and then justify them based on logical criteria.  They believe it is because our society does not see emotion as justifiable grounds for a decision. We value logic and science more highly than emotion, so we use them to come up with the reasons for our choice. It is an unconscious process, but understanding it can really help us to ensure our message is heard.

What does this all mean in terms of our communication with client, and being heard, understood and actioned? It means that it is essential that we make a connection that is based on more than just facts. We need to connect at an emotional level if we are to reach the decision-making parts of our potential clients’ minds.

Finding (and sharing) our Why

Understanding why we do what we do is not necessarily as easy as it sounds. Sometimes we need someone else to facilitate drawing it out. But once you can get down to the real ‘why’ behind your business, the real driver, and communicate it authentically, it will draw people to you emotionally and build that connection that drives decisions.

As the researchers at McCombs said “The earlier you make the emotional connection the better, because once consumers have decided they like a particular option, the more difficult it is for them to backpedal. Their thinking falls in line with the emotions.”